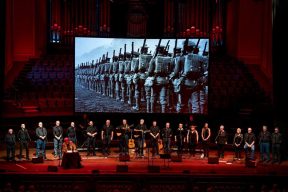 The final concert of Far, Far from Ypres took place on November 11th, 2018, the 100th anniversary of the Armistice marking the end of WW1. The concert was at the Usher Hall, Edinburgh. This picture shows the view of the stage. For scale, the screen in the background was 40 feet wide. For the final performance I made quite a few changes to the projection, including amongst others, some photographs of relatives of members of the cast. They of course wouldn’t see these but other family members might. I was slightly nervous that I had got the timing right, particularly as I joined the line of the cast for the final song, leaving the projection with no manual timing override. I got away with it!